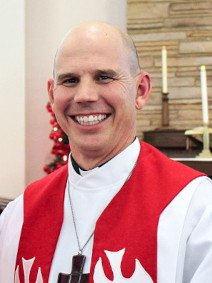 Rev. Michael S. Hageman was born in Lyons, Kansas to Bruce and Teresa Hageman on December 9, 1977. A native of Abilene, Kan., Rev. Hageman met his future wife, Shanna of Manhattan, at a debate tournament in Hutchinson Kansas and eventually was married to her on January 1, 2000. Since that time Rev. Hageman and Shanna have been blessed with two talented girls, Selah and Kiera Hageman.

Rev. Hageman graduated from Concordia University, Neb. in 2000; and Concordia Seminary, St. Louis, Mo, in 2004. Rev. Hageman was called to the inner city of Cleveland, Ohio, to Zion Ev. Lutheran Church in 2004 and served the Lord in Cleveland by serving on multiple boards throughout the Lutheran community in the city and concentrating on outreach to differing multicultural groups in Cleveland. Rev. Hageman was then called to serve the Lord in a changing community at Trinity Lutheran Church and School of Rockledge, Florida in the fall of 2009. He was heavily involved with the school ministry at Trinity and also served a long-term vacancy at Grace Lutheran Church and Pre-school, Merritt Island, Florida by connecting families to the life of the church.

Rev. Hageman enjoys the outdoors and participating in sporting events. He has been known to work with his hands and enjoys to have a good time with those around him. He and his family are excited to serve the Lord and the people in the community of Ulysses and Grace Lutheran Church.

Rev. Santi Keinbaum was born in Montevideo, Uruguay. As a young adult he settled in Barcelona, Catalonia (Spain). In the year 2000, Pastor Santi was involved in the Lutheran Church-Missouri Synod led Mission in Spain. He became a key leader for the mission work in the Barcelona area. In 2010, Pastor Santi and his family moved to the US where he began his theological training at Concordia University, Nebraska. In 2013 he was accepted at Concordia Theological Seminary in Fort Wayne, Indiana, where he received a Master of Divinity degree in 2017. He is tremendously thankful to the Lord for his wife and children who are unconditionally supporting him and who, by the grace of God, are the main reason why he can exercise his pastoral vocation with much gladness. He is excited about getting to know you and the Ulysses community.

If you wish to visit with him, please call Grace Lutheran to set up an appointment with him or just stop by the church from 9-4 on Tuesdays. He will be glad to get to know you, to listen to you, and to serve you.